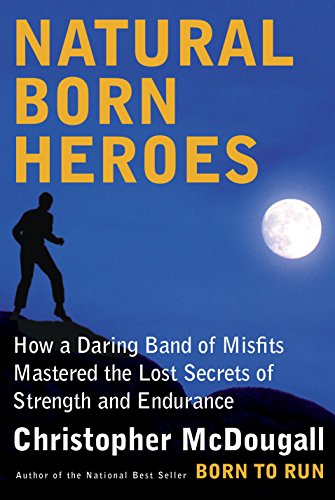 I think someone once said that the farther we get away from historical events the better we understand them.

World War II is almost beyond living memory now and yet stories keep emerging about till-now unsung but consequential contributions to the Allied effort – the effort that kept the world from coming under the thumb of Hitler and his Third Reich.

One such story is the battle for Crete.  And that story, fantastic as it is, serves as the backbone of Christopher McDougall’s latest book, Natural Born Heroes.

McDougal came to fame as an author with the success of his first book, Born To Run, which told the story of an obscure, hidden indigenous tribe somewhere in the wilds of Mexico that produces men who are able to run unbelievable distances at unbelievable speeds – without shoes.  Like that book, Natural Born Heroes is also concerned with local, untrained men who are able to accomplish almost unbelievable physical feats.

I would describe this book as layered.  It’s not strictly chronological.  It weaves back and forth between the main story – the capture of a German General during the occupation of Crete during World War II – and stories about Greek culture and the daily lives of the type of men who carried off this breathtaking capture and escape.   The book is filled with stories about the various kinds of physical and dietary regimens being discovered and practiced today that mimic or approximate the native lifestyle of the hardy Cretan.    He writes about Parkour, primal eating and various kinds of self-defense systems.

I read a lot of books, but it has been a long time since I enjoyed a book so thoroughly.  I found myself making time in my days to get back to it and looking forward to the hours set aside for it.  The story of the battle of Crete is enough, in and of itself, to rivet one’s attention.  As the book tells us, when Hitler’s Chief of Staff was being tried for war crimes, he blamed the loss of the war not on the resolve of the British or the entry of the Americans intro the European theater but on the dogged resistance of the Cretan citizenry whose efforts stymied the German plan for immediate subjugation.  Hitler had planned to move his armies to the Russian front in the spring and defeat the Russians in battle there before the terrible winter set in and his troops were caught in ice and snow.

That is saying a mouthful: that the freedom that the world has enjoyed for the last seventy years or so is due in large part to the pranks and hardheadedness of a local citizenry that prevailed against incredible odds.

McDougal has been criticized elsewhere for filling the book up with stories that are unrelated to each other.  I disagree with that criticism.  Even if the ancient myths and the character of the men who participated in the resistance in 20th century Crete are separated by millennia, it all makes sense to me.  The past does matter and it does affect the character of a place and its inhabitants.

The stories of modern day exercise and diet, even if not precisely the same as that of the Cretans, is nonetheless dramatic and informative.   We ought to be stronger and more healthy than we are and this book is a kind of expose for why we aren’t and what we might do to improve our lot.

This book is exciting and informative and profound.  Five stars.