Book Review: Lay Down Your Arms 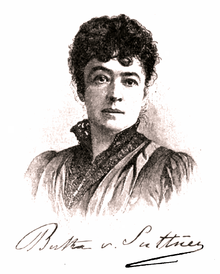 He said that a person ought to read at least two “old books” for every new book read. He argued that old books serve to correct a bias he called “chronological snobbery.”   As I remember, there were two parts to this bias: one being  the idea that the age we are in now is superior in all attitudes and philosophy, wisdom and knowledge to any other era or age.  The other is maybe just a bit contradictory and that is that moderns need to be shaken out of their prejudice that all people at all times have thought in the same ways that we do.

Under these terms, BerthaVon Suttner’s novel, Lay Down Your Arms, certainly qualifies as an old book.  It was first published in 1889 , some twenty-five years before WWI destroyed the world she lived in and about 50 years before WWII gave us the realignment of Europe that many of us take for granted today.

There is no mystery about the book’s intent.  As she says in the final pages, anyone who reads the title will know it.

I came of age in the last years of the Viet Nam war, so anti-war sentiment is nothing new to me.  In that time every other song on the radio was an anti-war song and war protests were common on seemingly every college campus in the country.  Like so many of my peers, I read Dalton Trumbo’s Johnny Got His Gun.

So how was Von Suttner’s book anything new to me?  What did it tell me that I didn’t already know?

Well, Lewis was right.  People in Von Suttner’s day did not think like we do today.  Then, before Auschwitz and the atomic bomb, the prevailing sentiment about war – at least in the circles in which the book’s protagonist moves – was that it was glorious.  The nations of Europe – and there were lots of them at that time – seemed always to be spoiling for a fight.  It was a matter of national pride and individual advancement.  Men joined the military with the hope that they would see battle.  And death in the field was a great honor.  The soldiers of conquering armies returned home to elevated social and economic status.

It is true that today we honor fallen soldiers and for the right reasons. These men, we know, died to protect the innocent, to stop a tyrant.  But the wars Von Suttner writes about were simply disputes about territory – which monarch would have control of this or that bit of land.  They issued in enormous horror – bloodshed and disease and the destruction of wealth and nature – and often ended with no clear winners and little in the way of political gain.

She makes the point that it was a part of the Germanic culture of the day that the horrors of war were not to be thought of or mentioned in polite society.  To do so was an act of cowardice or treason.

And the wars fed on each other.  Winners basked in glory and looked for new conquests while the defeated lived for a day of revenge.

Given that the subject was off limits, there was no living consciousness of the cost of war.  What the nations did, time and time again, was line their best men – the young and strong, the old and wise, fathers and sons – up in fields and have them slaughter each other.  And yet there was little public understanding that what was being spent and used up was far more valuable than anything that was being gained.

This book was Von Suttner’s attempt to move the conversation into sobriety.   She lived out her conviction by trying to persuade Austria not to pursue the course that eventually led to WWI and the death of millions.  She died just before the outbreak of that war.

The book is a true novel, not a mere polemic.  The story of Martha Tiller’s life – it’s told in the first person, in her voice – is an engaging one.  There are real characters and one convincing love story.