Book Review” The World of Yesterday 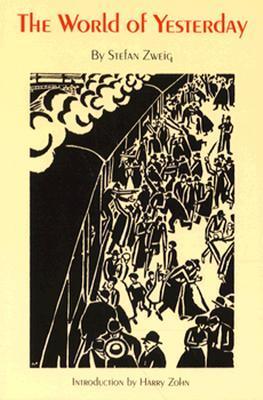 I’m sixty-five years old. I’m educated and I have spent a good deal of my leisure reading and watching movies. After reading this book I find it hard to believe that I had never heard of Stefan Zweig until Rod Dreher mentioned him in a blog post a few weeks ago. Dreher said that the book was about Austria before and after WWI. I have personal reasons for being interested in that war. My grandfather fought in France then and could never – even 50 years after the fact – recount his experiences there without crying. I have also toyed with writing a book that would include characters and a scene or two from old world Austria.

So my curiosity was piqued and after some deliberation – I thought that the book might be dense and nearly impenetrable for me. It was also very long – I downloaded it on my Kindle. I’m glad I did.

First I should say that the book is quite readable. One of the things you learn from the story is that Zweig was a prolific writer and this book is the work of one who has mastered the art of narrative. Although the subject matter was all new to me, I sailed through the book.

Have you seen the excellent movie “Midnight in Paris?” There a contemporary American writer is magically transported to Paris in the 1920’s where he meets and carouses with the great literary, musical and artistic personalities of the day – Ernest Hemingway, F. Scott Fitzgerald, Cole Porter, Pablo Picasso, and Salvador Dali.

The movie is a real hoot, but this is what Zweig’s life was actually like. This guy traveled the world and moved in the highest intellectual and artistic circles in Europe for decades on end. He worked together with Richard Strauss in the composition of an opera. Toscanini was a regular guest in Zweig’s home in Salzburg. He had a long and intimate friendship with Sigmund Freud.

All of that is interesting in and of itself, but the thing that Zweig adds to the story is his take on what art and poetry meant in his day and time. Before WWI poets were rock stars (who among us today can even name five working poets) and people looked to them not just for aesthetic satisfaction or entertainment but for insight into life and the affairs of the world. Zweig was devoted to poetry and poets and his descriptions of many of the famous (and not so famous) poets he came to know are affecting.

In the book you also get an insider’s view of the World Wars. I had hoped to get a better understanding of why WWI was started and what anybody expected to gain by it, but Zweig leaves it as the mystery that it is. Likewise he, a Jew himself, meditates on the hatred his people have suffered through the centuries and, like Freud and everyone else, can find no rational answer.

Zweig’s life was, for a long time, a near perfect dream. He achieved critical acceptance and even acclaim very early in his life and he spent decades free to pursue his great passion – literature. But he was ruined. When Hitler rose to power in Germany Zweig was banished and his works burned and censored. Maybe that’s why I had never heard of heard of him. It may by that his oeuvre yet suffers from Hitler’s destructive hand.

2 Responses to Book Review” The World of Yesterday